Since September of 1984, the East Lansing Educational Foundation’s (ELEF) mission has been to “enhance excellence in public education by …
Danielle OBrien 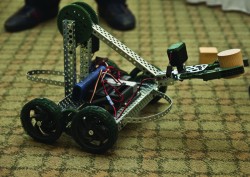 Since September of 1984, the East Lansing Educational Foundation’s (ELEF) mission has been to “enhance excellence in public education by raising and distributing private resources for the benefit and enrichment of all students.”
ELEF’s president, Mindy Emerson said, “Strong schools, which maintain high standards and opportunities, are a hallmark of a successful city when attracting new businesses and residents. ELEF wants that tradition of excellence to continue in the face of perpetually dwindling state funding.”
The organization began when one of East Lansing’s first public schools, Bailey Elementary School, was scheduled to close. In order to memorialize the school, members of the East Lansing Bailey Neighborhood Association decided to donate leftover funds raised by the Bailey Parent Council, thus beginning the East Lansing Educational Foundation.
“The foundation supports supplemental opportunities, which in turn support a strong East Lansing community,” said Emerson.
Today, the educational foundation develops enrichment programs, fosters the development of alumni relations and helps to fund equipment and facilities, which are not otherwise funded for East Lansing schools.
This year the ELEF celebrated 25 years of service to the East Lansing community. Donations totaling over $400,000 have enhanced performing arts, student leadership and curricular excellence programs across the district. Each fall and spring, teachers throughout the district are encouraged to apply for various grants, which benefit all areas of K–12 curriculum.
The ELEF would not be possible without the strong community support that they receive. “We have a strongly–committed hard–working group of volunteers serving on our governing board,” stated Emerson.
With a dedicated team of volunteers, the ELEF is able to continue to raise money for the district with their various events. These include a September football tailgate to welcome new kindergarten families, a May golf outing and an awards dinner to honor graduating seniors.
Emerson said, “The donations by our citizens have had, and will continue to have, impact now and for future generations of students of the East Lansing Public Schools.”
If you are interested in volunteering with the East Lansing Educational Foundation, contact Emerson at elefmindy@gmail.com.