Eisenhower Dance Returns to the Wharton Center with Red, Hot and Blue 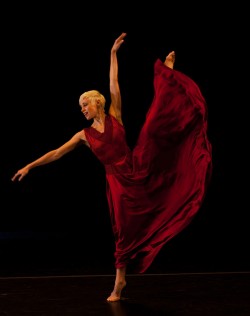 If you just love the passion, drama and soulful expression of contemporary dance, you’ll definitely want to go see Red, Hot and Blue. Returning to the Wharton Center after a 2012 run of the popular Motown in Motion Act One Family Series performance, Eisenhower Dance presents a powerfully compelling evening showcasing an array of works by renowned choreographers Ron de Jesus, Michael Foley and artistic director Laurie Eisenhower.
Alicia Cutaia, rehearsal director and costume manager for Eisenhower Dance, will be dancing in all of the pieces except for one. Having performed in Motown in Motion last year, she is familiar with the Wharton Center stage.
Cutaia’s passion for dance takes her back to when she was a young child. She started dancing when she was just 4 years old and has a strong background in ballet and jazz. “In high school, I went back and forth between wanting to be an engineer or a dancer. When I realized I might not dance anymore, I felt compelled to dance.”
As an accomplished contemporary dancer who’s been dancing with the Rochester, Mich., based Eisenhower Dance Company for eight years, Cutaia loves sharing her passion for dance with audiences, yet she also enjoys studio work.
“I like being in a studio, working with the choreographers. Oftentimes, they come in with an idea or phrase of movement, then they use me, and the other dancers, as their muse to create or modify the movement. Sometimes it’s better than performing,” said Cutaia. 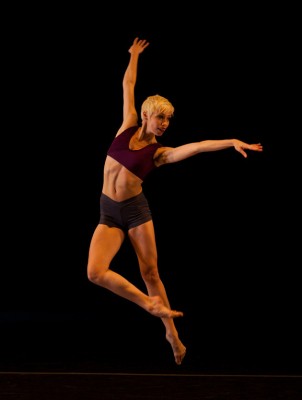 Audiences can expect to see a program that is very diverse in its range of expression explained Laurie Eisenhower, artistic director. This evocative work takes you on a journey as you experience the high energy and power of “No Angels in my Kamikaze Heaven” by Michael Foley, the beautiful, soft patterns of “Threads” and the Southern bluesy feel of “Better Places,” both by Laurie Eisenhower.
A newer work, Eisenhower debuted “Better Places” at a recent premiere. “The work does not have a narrative story. It is mostly an inspiration and reflection of the music. It is a suite of five dances ― each with its own “flavor,” said Eisenhower. “I selected music that had a Southern or bluesy feel. I wanted to create something for our repertoire that was upbeat and musically accessible.”
Other works featured in the performance of Red, Hot and Blue include “Love, Love, Love,” also choreographed by Eisenhower and “Begin with the End in Mind” by Ron de Jesus.
First-time visitors of concert dance will be shocked and excited at how versatile everything is explained Cutaia. “It won’t be what they expected, but in a great way. The program is accessible to many ages and interests and is a good show for first timers to see.”
Red, Hot and Blue will be at the Wharton Center for Performing Arts Feb. 12, 2014, in East Lansing. Tickets available at www.whartoncenter.com.