Give a Gift for the Heart, Body and Soul This Valentine's Day

…
anncool
Pamper yourself or a loved on this Valentine’s Day with a gift from Steven L. Marvin Salon and Wellness Spa. Join the salon in celebrating its 30 year anniversary throughout 2013.
Located in Holt, the salon is an Aveda Concept salon. Besides traditional hair and nail care, the spa offers many services for personal care, from facials to massages, body waxing to hairstyling, the services are meant to refresh your body and renew your spirit.
Steven Marvin bought the business in 1983 and has become known in the area for his innovative hair styling, a skill he knew he wanted to explore since an early age. Having left the Navy at 20, Marvin fell back to an early interest that developed when, as a young child, he would accompany his mother to her hair salon. His mother’s stylist would teach him to style his mother’s hair when she was out of town. Marvin’s interest has never waned nor has the longevity of the salon he started three decades ago. 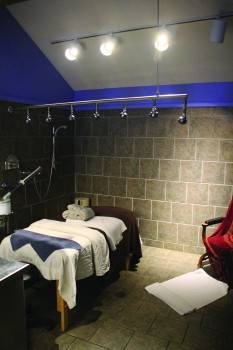 The secret to his success is simple. “I love styling hair,” said Marvin. As a hands-on owner, Marvin strives for excellence in all areas of the business. The salon and spa staff consists of more than 20 employees. Continuing education is very important to the staff and Marvin, who continues to study the art, learning new trends and techniques and receiving refreshers on classic styles.
Marvin is also known for his modern salon design. In the 30 years he’s owned the salon, Marvin has remodeled it several times to keep it updated and fresh. His clientele has grown steadily throughout the three decades. “Word of mouth and social media” are two popular means of spreading the word about Steven L. Marvin, along with more traditional advertising.

During his frequent visits to New York, Marvin is inspired by the trends and culture he sees there. Marvin said that the current trend in hair fashions is for more intricate styling, not just wash and wear. While the ’70s was known for precision haircutting, the ’80s for perms, and the ’90s for casual sports styles, he thinks the turn of the century also turned the corner for styling that’s more formal. “Dressing up is coming back,” he said, “especially with regard to hairstyles.”
Marvin’s guests are not just wearing their hair straight, they want more done to it. The salon is responding by offering sessions featuring a shampoo and blow dry for $15 to help customers do something different when fixing their hair at home.
The salon started celebrating its 30 year anniversary early. Beginning last November and into the New Year, Marvin hosts Happy Hour every third Friday of the month.
“Happy hour is a time to bring friends and have a good time,” Marvin said. It’s meant to be a time for fun and relaxation, and taking part in some of the services that the salon offers. Light refreshments are served as guests enjoy one of the many mini-services featured. In addition, the salon also sponsors monthly events.

February features a Valentine’s Day Contest. Now through Thursday, Feb. 14, clients can visit the salon’s Facebook page and enter to win contest prizes. The grand prize includes a Steven’s Day of Beauty Package with a night at The English Inn including dinner for two. Second prize consists of a mini facial and massage. Third prize is a set of Aveda Products valued at $25.
Marvin is not only generous to his clients, but he is also a major supporter of the greater Lansing community. He hosts many charitable events throughout the year. Among the many other causes Marvin supports is the Relay for Life event that promotes cancer research and awareness. He also contributes to the Lansing Food Bank and Council of Domestic Assault.
For more details, contact Steven L. Marvin Salon and Wellness Spa at (517) 694-7788, or visit them on Facebook or their website at www.stevenlmarvin.com.